Just to gather up in one place the various scattered bits and pieces I have done:


This entry was originally posted at http://heliopausa.dreamwidth.org/385.html. Please comment here or there.

It's Mid-Autumn Festival again, and I have been out gazing at the moon - yes, there's the miraculous tree, and there's the Moon Boy lying down under it!
But that's as far as I've got by way of recognising the day - no mooncakes, no persimmon, no green tea.  I did bestir myself - partly because there are two children coming this weekend, to cook and play games - to buy two star-lanterns, and some papier-mache masks, but that's as far as I've got.

Still, I had the most gorgeous chat-session with colleagues earlier this week, with them recalling the toys of their childhood (ie in the 80s and 90s).  The star-lanterns their parents used to make from cellophane and bamboo, with a small lighted candle inside, and how excited they were as children to be out at night and around the village with them.
"With a real candle inside?"
"Oh, yes!"
"But if you got it - if a little kid got it unbalanced, mightn't it catch fire?"
"Oh, yes!"
And... did that ever happen to you?"
"Oh, yes!"  Enthusiastic agreement all round. "Every single time!"
And they told me lots more - about the moon-boy and the moon-lady (who are in totally different legends, though they both relate to the moon) and what foods are special for this time, besides moon-cakes, about the children's feast, where the children would parade - still with lanterns, I suppose, unless they'd already gone in a sudden blazing-up - around the table loaded with fruits and sweets, until the word was given to scramble for the goodies, about how they would make little quasi-fireworks from grapefruit seeds, and especially about the Autumn Festival toys that parents or neighbours would make for them - star-lanterns, and the more complex lanterns, made so that convection from the lit candle would move vanes, and make rotating shadow-pictures (also with cellophane), and one where the moving shadow-pictures were driven by the whole lantern being wheeled ahead on a stick, with the wheels interlocking with something making the picture part turn, and a different kind made from condensed-milk tins, which made a clacking noise as it was rolled around the village - simpler, less prosperous times, times they looked back on very fondly, but were very clear had gone forever.

What rotten times we live in.  The natural world is still beautiful, but the political/social world seems to be unravelling everywhere.
Well... is it time to try to scrape up five things in the world that I'm happy about?
1.  The displays of fresh fruit and vegetables at the market - so lovely!
2.  Saturday's cake-making session, which has boosted my language skills as well as resulting in two loaves of banana bread, one each.
3.  Language itself, and the fun of finding links from one language to another.
4.  Vanuatu, which has been really throwing itself into the work of extricating their land/region from environmental disaster.
5.  (Long pause, while I tried to think of one more thing.  Then a dear friend sent me this:
https://www.adaptnetwork.com/nature/penguin-swims-5000-miles-reunion-man-saved-life/
So that can be the fifth.)

The weather is at that indeterminate point where it's hard to decide if there's any need to have hot water to shower in or not.  Hot, but not brutally hot - 32 now, and maximums not above 37 all week.
Still, it's hot enough that it's not really the weather to want to bake in, but the woman next door asked me, after I'd taken them some cakes as a return for their kindness a while back, if I'd teach her how to make cakes - cakes, generally, not some specific cake.

Not that I'm much of a cake-maker - I wouldn't be thought of as such by the CWA, or indeed most home-cooks in Australia - but it's not something that home cooks have done here much, to date; most home-cooking has been stove-top, pretty much, so here, sometimes I'm thought of as knowing about these things.
And the upshot was that, there we were, on the weekend, me and the woman next door, who doesn't speak English, and a school-age niece, who does speak English, plainly brought along to help just in case (to my chagrin, because I like to practice my Vietnamese).

A pleasant time ensued, with me demonstrating the simplest, quickest cake recipe I know (passionfruit-yoghurt cake, recipe on request!) and them occasionally taking over for stirring etc.  The chat went on in two languages, only once having recourse to a dictionary - for "neighbourhood" - the niece said the word I was using was very old-fashioned, and that nobody used it now.  I wish I could talk to a linguist about that - about why it's old-fashioned, or if that's just a school-age view, and if it's not, what the different connotations of the different terms were.
And we all had cakes to finish, of course - we made the mixture into cupcakes - and they took home two dozen or so, and the remainder are downstairs in a biscuit tin.  Next time - a banana loaf (so useful for using up bananas!) and after that I'll have run out of recipes I know well enough to make while someone's watching, I think.

It will have been a short, but flattering, career as cake pundit.

Only a week or so back I was enjoying the sight of the clear night-sky in the sharp wintry weather of rural southern Australia - it was especially good because someone showed me where the stars of Scorpio were hugely and loosely sprawled around Jupiter, which itself seemed brighter and yellower than ever.
Now I'm back under the cloudy skies of Hanoi - very cloudy right now, because of Typhoon Wipha, which has brought lots of rain over the past four days, but has also made things beautifully cool - I had been dreading the return to heat and humidity.
That may still come of course, but right now, at least, things are damp, but easy.

(Oh damn.  Just heard of "five dead in floods".  "Fourteen people still missing".  So much for uncomplicatedly enjoying the cool.)

I have seen so many wonderful pictures here lately, of summer flowers and summer abundance, especially on

puddleshark's pages - thank you, photographers!
And though I don't have the skill or the eye that would do justice to it, here's an attempt to share in return some of what summer here is looking like: a picture from this morning, of summer flowers with a working life.
These are lotus petals and lotus stamens, laid out in the heat to dry, before being mixed with tea, to make fragrant and soothing lotus tea.  (If I'd taken the photo two days ago, there would have been leaves and seed-pods as well, also being dried, but those have already finished drying.)
The black specks hovering over the gold of the stamens are bees, wasting no time in taking all the nectar they can get from the lotuses, before they are taken away inside the tea-shop to be blended. 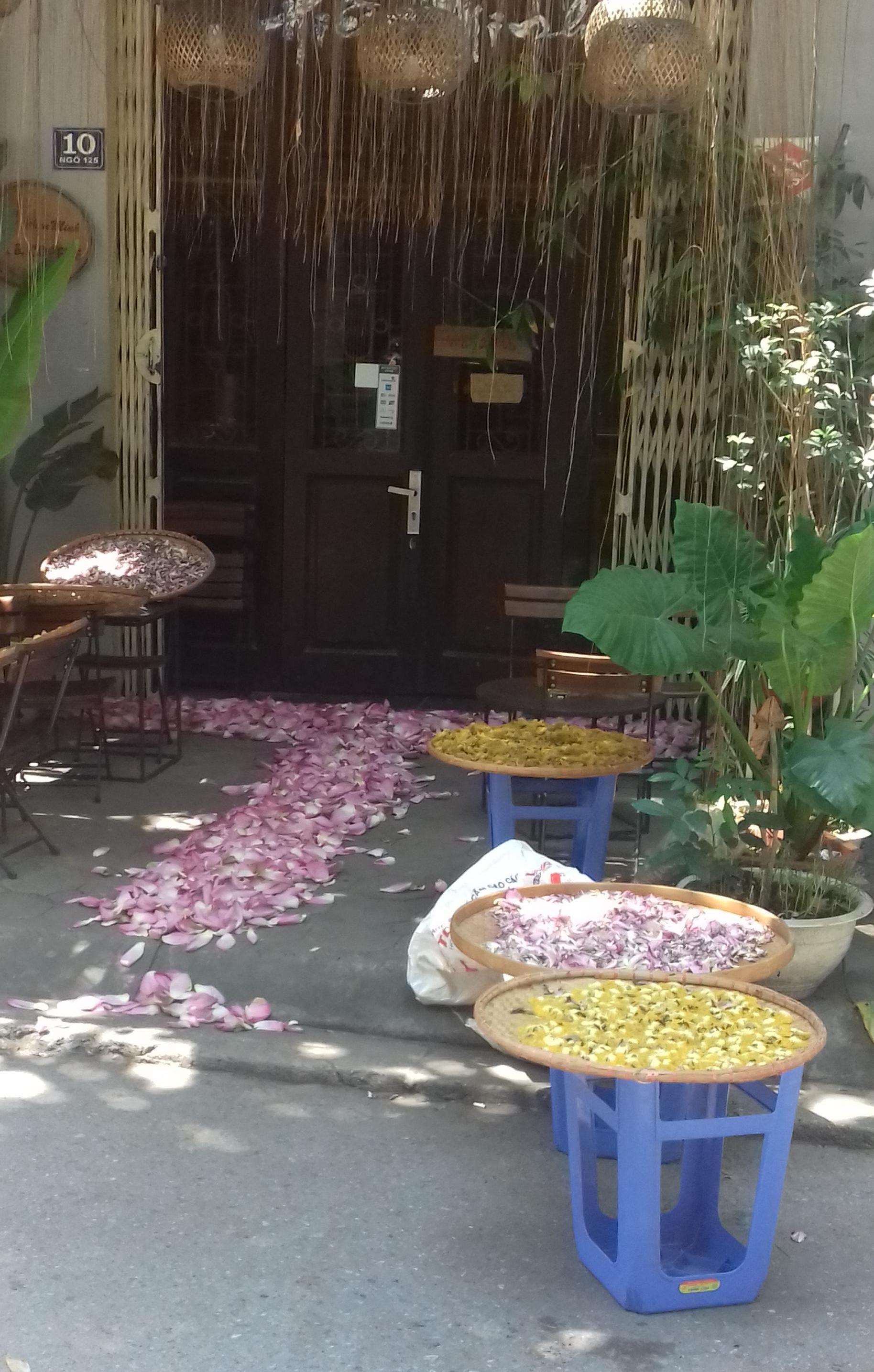 Another long, hot day here, with the mangoes from next-door-but-one's tree still thudding down into our front yard here - it's a big tree, and the houses are built very close together.
I have been thriftily picking them up, and eating them, unless the ants have got to them first - or else when there's too many accumulated, I've been slicing them up and freezing the pulp.  The ants get to quite a few, though, because a ripe mango falling on a brick-paved courtyard - well, you follow.  And now I have reminded myself that it's time to get up and see if the mangoes most recently heard crashing down are to be breakfast or not.

Phew!  What a few hours that was! Today I went voting.

The Australian electoral system, which I love and staunchly believe is one of the best in the world, demands a lot of the voter, and I spent quite a while this morning going through the dozens of candidates for the Senate in my state.
The House of Reps is easier, just a handful to sort through, and not too tactical a vote needed, but for the Senate I printed out the lot, and checked them all out - parties and policies and past associations - and then sorted them into three lots:
- those who were never, ever going to get any kind of vote from me, and
- those whom I really wanted to get in, who were getting a high-ranking preference vote that will actual count, and
- those who were pretty much getting a preference just to make up the numbers.
(For the Senate, those who vote "below the line", that is to say deciding not to let a party preference deal decide how the vote falls, must vote for at least twelve candidates - hence I needed to vote for some to make up the numbers, even if I didn't think they'd be brilliant members of the Senate.)

And then I took myself and my carefully annotated form guide to the Embassy, and voted.  Job done!  :)

***
This person's not in my electorate, and as an Independent his chance of getting in is vanishingly small, but I was very taken indeed by his campaign video:
https://www.youtube.com/watch?v=PO-TleNQCfM  (just under a minute, and worth a look, if you enjoy politics!)

Two Southern White Rhinos have been born at a safari park/zoo in Vietnam.  :)
https://tuoitrenews.vn/news/features/20190505/rarity-two-white-rhinos-successfully-delivered-in-vietnam/49886.html
They were actually born a couple of weeks back, but I guess their keepers/carers wanted to be absolutely sure that all was well with birth and post-birth and bonding and suckling, before making the announcement.
It's the Northern White Rhino which is on the verge of actual extinction, of course, but the Southern is endangered enough that two more successful births are good news.  Also, the news story noted that "the mother rhinos stayed within one meter of the baby rhinos most of the time. Meanwhile, the two calves themselves would not stop running around the playground, giving their mothers quite a tough time to catch up", which was a picture I found very endearing.

May Day greetings to you all!  Workers' rights and bunches of lily-of-the-valley.

I've been travelling a lot, to Australia and New Zealand, mostly because of family members being ill - and it's really good to be back.  :)  Australia - the parts I was in - was showing the impact of a long, hot summer, with dry, dry gardens, and produce like tomatoes astonishingly expensive - at least, I was astonished to be charged a dollar more for a cheese-and-tomato sandwich than my friend was for a ham-and-cheese; both my friend and the sandwich-shop woman laughed at me for being surprised.
New Zealand, though - oh, what a beautiful, damp, green country that is!  A magic country - no wonder they did all the Tolkien there.
Collapse